FREDDI ROKAW
ACADEMIC PORTFOLIO: PARTICIPATE ACTIVELY IN THE PROFESSION
NARRATIVE:
In order to continue my professional development, immerse myself in the field, and network with other professionals, I have become a member of AACE, ACET, AERA & ASTD.  In June 2012, I attended the AACE EdTech conference in Denver as a fact-finding mission and networking opportunity.   It was my first educational conference and I learned so much.  I especially enjoyed participating in the “Emerging Scholars” group.   At that conference I was also fortunate to network with many people in the field - and meet one of my “heroes,” Mr. Alan Kaye, who I hope to continue to be in contact with in the future.

I have attended some key webinars that were offered through the above-mentioned professional groups, as well as through Purdue.  I recently attended webinars with David Merrill, Donald Kirkpatrick, and James Lehman.   Guest lectures have included:  Amin Saberi from Stanford’s Venture Lab speaking about the learning platform, Dr. Jason Lei from JetBlue Airways speaking about Human Performance Technology in Action, and Dr. Rachel Eunjoon Um from The Learning Network speaking about her role as an Instructional Designer at The New York Times.  I have also had the honor of being a guest speaker, representing the online students in our program, for Purdue’s Virtual Open House on four occasions within the last year. 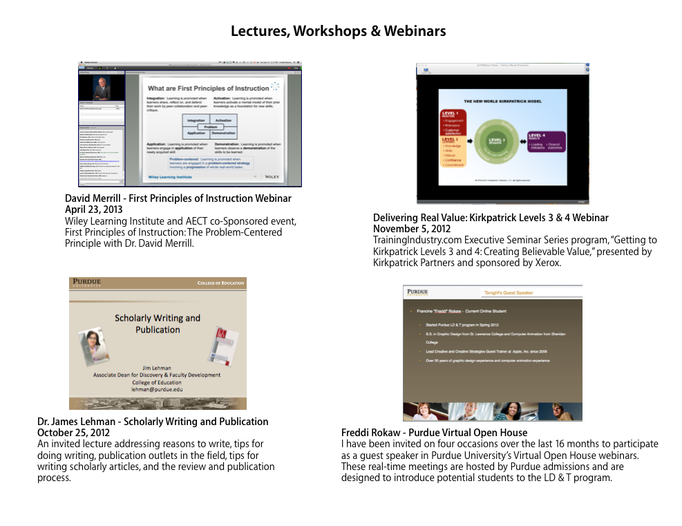 (Click on image to enlarge)
Back to Academics Homepage >